Today was for heading to the main plaza and doing a walking tour. Even if it was close to 90 degrees.

First off though was breakfast at the hotel. The presentation of the juices, scrambled eggs and yogurt was nothing short of beautiful. 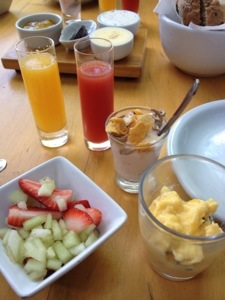 Although cabs seem popular here, we like to get to know a city via its public transportation. We walked about 10 minutes to the subway. A 10 trip ticket was 25 pesos, the equivalent of $5. Do the math, people. That’s 50 cents per subway ride.

We took the D line to the Plazo de Mayo. Described as the political center of the country, it is full of green space, fountains, and protestors. Perhaps the precursor to the occupy movement, you have Malvinas war veterans protesting no combat pay, the madres also protest the dirty war here. 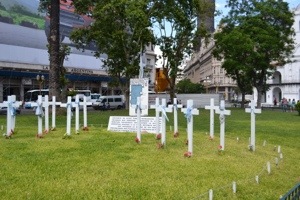 There was a Christmas tree in the plaza.

The Casa Rosada is the focal point of the plaza. 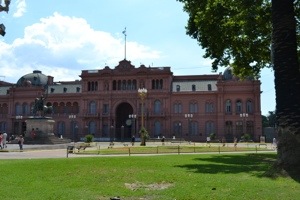 We happened to see guards walking down the street. They must have been so hot! 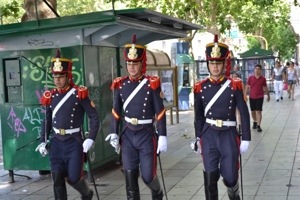 We walked up the Avenue de Mayo, past once fancy hotels, interesting architecture, and finally the Congress building. It was plenty hot, but mostly interesting.

On the way to catching the subway home, we passed an open Movistar store. We found out that the iPhone is still uncommon here, so they don’t readily have the right size SIM card. It’s looking less likely that we will get one on this trip. But as my Instagram and Foursquare followers have likely found, there is quite a lot of free WiFi at restaurants. And a little disconnection never hurt anyone.

Meals today consisted of a few stops for snacks that made up lunch. Plus, a stop for ice cream when we were back in our neighborhood. We found out that where pies might be popular for Christmas dessert back home, ice cream serves that place down here. There was a long line as most people seemed to be getting multiple kilos of ice cream. A woman in line chatted with me, apologizing for the unusual heat. She must have quoted a funny humiture index, as she claimed the “skin temperature” was 50 degrees Celsius (122F). Not only did she apologize for the heat, but for the trash in the streets. She said that was a new phenomenon, related to a corrupt mayor. The things you learn while waiting for ice cream.

We have a fancy dinner planned for tonight. I’ll update tonight when we get back. Dinner is at a traditional Argentinian time, 9pm.